I finished up spinning the 16ounces of llama fiber I began working on last month. Love It! It’s a little late in the season to start a project with it so I have decided to store it for later. 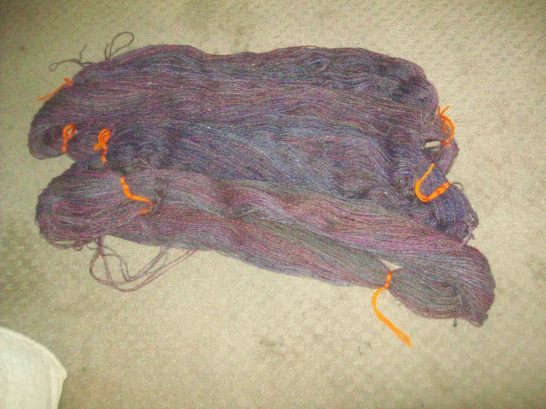 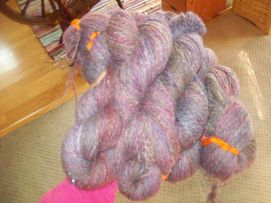 I really want to start working on plant fibers now for spring. We’ll see. I still have about 8oz of the golden merino left to spin lace-weight on my Kromski Symphony. Hopefully I can finish it soon. It has been on the wheel forever, like literally years.

I washed up the skeins that were recycled from some ugly knitted projects I made years ago and never wore. The skeins were hung to dry on a drying rack placed in my bathtub. They are now packed away awaiting a second chance at becoming something nice to wear.

I finished my Diminishing Rib Cardigan from Interweave Knits Spring 2009 cover and I like it. I kind of haphazardly spun and chain-plied that roving maybe 8 years ago and packed it away thinking I didn’t like it only to fall in love after it was knit up. I believe it is Ashland Bay merino top in the rose colorway. Sometimes it’s hard to perceive how a yarn will look once it is knitted, crocheted, or woven.

hanspun sweater stretched out to dry

The pattern did not call for a closure however I chose to crochet two pairs of ties on it. I also stabilized the neckline with  2 rows of chains stitches. I am not sure if I did the tubular cast-on correctly but it made the neckline more stretchy than I wanted. This is my first handspun garment. I’m pretty happy with the result.

I had not finished spinning my llama roving yet but I wanted to make another winter item. I had  2 skeins of  bulky Noro Kochoran yarn in the color #65 that I bought at a local yarn shop liquidation sale. The yarn was hard on my hands. It was difficult to slide on my needles (Knit Picks nickel plated circulars in size 8). Kochoran has angora bunny in it. It shed a lot as I worked with it however I think that has resolved itself now that it’s knit up. I should have went up to a size 9 as recommended on the yarn label. ouch.  I alternated it with some chain-plied handspun natural white cormo yarn.

What began as the Welted Cowl published in Vogue knitting  winter 2010 morphed into a pretty nifty poncho as I changed up the amount of ribbed purled bands, completely disregarded gauge, and used up every last bit of the yarn I had. It is super, don’t need a coat, warm.

I have had an fascination with handcrafted textiles since before I can remember. The most influential women in my life have been skilled at sewing and needlecrafts. This includes great grandmother Mattie and grandma Arelia who was ever encouraging and proud of her “sweet pea” as I attempted my first projects at the age of 11. Starting with braid weaving, then progressing to sewing, then crochet I was on my way. I received a bachelors in Apparel, Textiles and Merchandising from Eastern Michigan University in 2006. Over the years I have picked up knitting, loom weaving, embroidery and finally spinning every type of fiber I can get my hands on. The process of creating using traditional techniques has brought me much joy and fulfillment over the years and I hope to inspire others to explore our heritage skills through my sharing. View all posts by Melvenea