I don’t know what it is about sunshine. It seems that every time I come into this season I go into a fiber frenzy. Suddenly I have this unquenchable urge to wash skeins of handspun that I have hoarded all year, wash and spin raw fleeces, dyestuff, and spin everything in sight. I guess ’tis the season for spinning.

Oddly enough in the months prior I was on a weaving binge. I literally wove off 30yards  in 10 days. Yes, when I get motivated I’m all in. I won’t share that here. Perhaps I will make a post on the weaving bonanza from earlier this year when that train cycles back around. Okay, maybe a sneak peek of the outfit and shawl I wove back in May.

Yes, I will be weaving again soon if history is any indicator. I’ll be knitting in the fall because that’s what happens when you finish spinning a bunch of yarn. Next thing you know there will be snow and grey days and I’ll weave again.

Anyhow, there is too much to explain so I will just add some pictures in here in hopes of capturing the continuum of how this fiber fanaticism has overtaken my spring and summer so far.

In late May I discovered that Anne Grout is making her beautiful ceramic spindles and bowls again. So then I had to order myself a turnip and an acorn. Then I discovered Stephen Willetter who is making glass tipped spindles, gah.

This is the start of that slippery slope. When you buy a new spindle you have to justify the purchase by spinning on it.

I met up with some crafty friends at Buckleye’s Homestead for their annual sheep shearing. As I spun on my cute little spindles one of the volunteers started passing out bags of freshly shorn fleeces. They had Jacob, Cotswold, and Cheviot. Well, I’ve never spun Cotswold so I took a fleece home. They were free after all and of course, it needed to be rescued. wink, wink.

The fleece I got was extremely soiling and matted. I would say the worst I’ve ever worked with. I should have given up really, but it was a gift. I always keep gifts, always. I washed the fleece and probably matted it even more. I literally had to rip each lock apart so that I could painstakingly comb them. It was like combing dreadlocks (yes, I’ve done that before twice).

The resulting yarn is actually nice. It is very lustrous with a medium grade of softness. I learned that this breed was the most popular in American before merino came on the scene. I’m sure it will make some really durable items. 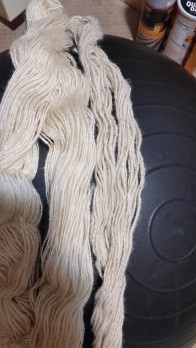 The combing process leaves a lot of waste or short fibers. I didn’t want to throw out the 2nds so after carding and spinning a small sample I decided it would make a nice tweedy yarn if it were dyed. I am not a dyer. I try, but things always seem to go awry. What I thought would be a rainbow pot with red, blue and yellow ended being dominated by purple and violet somehow. The resulting color was unexpected yet pleasing. 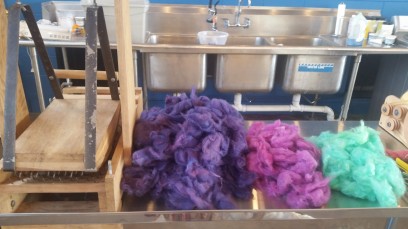 I didn’t want to waste all the dye still left in the pot so that caused me to keep dying stuff I had in my stash. I also went to my crafty pal Ginni’s house and we did more playing with dye.  I did some yarn in varying colors with varying levels of success. I also washed up my box of neglected handspun skeins. 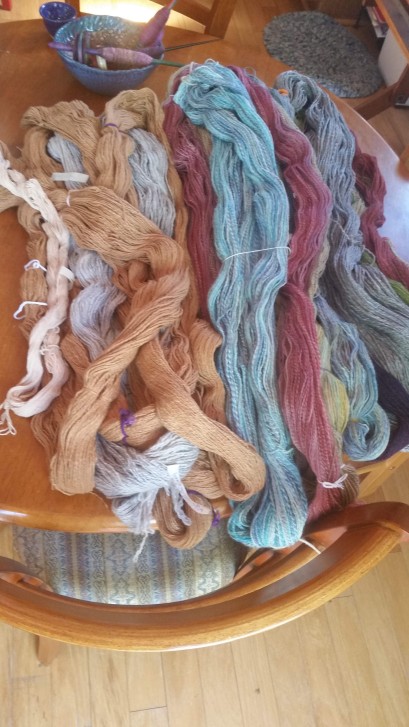 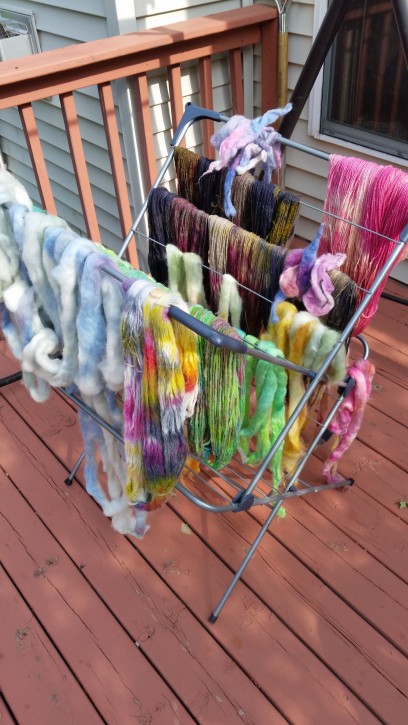 Tour De Fleece snuck up on July 6th as I am now knee deep in my fiber frenzy. I decided to meet up with some spinning pals I met through Duneland Weaver’s Guild. We met at the new studio in Chesterton, IN, 3Moons Fiberworks. That was a blast and I got 2 bobbins of the tweedy Cotswold 2nds spun up.

I am on 3 Tour De Fleece teams on Ravelry. Why 3? Well, 1 team, Yarn Therapy Zone, is for spinning on my ever growing spindle collection and another is for my recent discovery of The Hobbit and the Mirkwood spindle collection inspired by it. The 3rd team is with Fiber Love Diary, one of my favorite YouTube Podcasts, is going to hopefully get me to finish winding all of my newly spun yarn into skeins and finishing my tweedy Cotswold batts. I’ll do that and spin up the nearly 2 pounds of the new California Red breed I discovered recently while researching Cotswold.

There have been some discoveries along the way.

I tried the Suint fleece washing technique. You basically put a whole fleece in some water outside and let it sit for a week.

The fermentation process is supposed to magically clean the fleece. Too good to be true? Nope. It works! I put 3 pounds of Romney in and it came out clean and fluffy. There was a sulfur smell. I submerged it twice in a plastic bin filled with clean water and left it outside to dry. No smells. Just clean, fluffy fleece. This is a real game changer.

Then there is my epic spindle discovery.

I had been winding yarn singles off my beautiful, handcrafted spindles using a homely mandarin oranges box.

I thought to myself hmm, can’t I do better than this? Believe it or not, of all of the handcrafted spindles on the market, there are very, very few spindle lazy kates or spindle holders for sale. I have only seen one on Etsy that could work for both top and bottom whorl spindles and it cost $66 (and was, of course, sold out). I got the idea to make my own box out of more permanent materials.

I had 2 sets of nesting acrylic shelves in my basement that I bought years ago. After drilling holes in them and adding some bolts my new adjustable spindle lazy kate/ storage display was born. Now I can display all of my spindles and store and ply projects all from the same place. 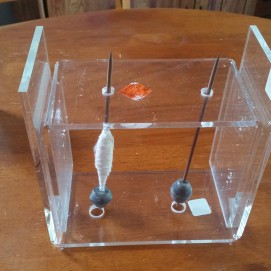 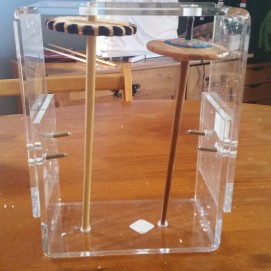 I’m not sure how much longer this spinning binge is going to last but I’m enjoying it. I’ll be taking my spinning on all of my summery adventures at least for the time being.

I have had an fascination with handcrafted textiles since before I can remember. The most influential women in my life have been skilled at sewing and needlecrafts. This includes great grandmother Mattie and grandma Arelia who was ever encouraging and proud of her “sweet pea” as I attempted my first projects at the age of 11. Starting with braid weaving, then progressing to sewing, then crochet I was on my way. I received a bachelors in Apparel, Textiles and Merchandising from Eastern Michigan University in 2006. Over the years I have picked up knitting, loom weaving, embroidery and finally spinning every type of fiber I can get my hands on. The process of creating using traditional techniques has brought me much joy and fulfillment over the years and I hope to inspire others to explore our heritage skills through my sharing. View all posts by Melvenea